As you can see, we have an exciting programme of winter talks lined up for the forthcoming season. All will take place in the Digby Memorial Church Hall (Digby Road, Sherborne, DT9 3NL).

Doors open from 1.30pm and talks begin promptly at 2pm.

Tickets: £5 to include light refreshments; entry is free to members of Sherborne Museum (except for the two memorial lectures). To find out more about becoming a member, please see here for further information. The Black Death in Dorset


The Black Death arrived in Dorset in the summer of 1348. Within a year the whole county had been infected by the pestilence, from which between one third and one half of the population died. Families, villages, towns and the Dorset landscape were changed forever as the economy adapted to a smaller population.

Dr. Mark Forrest, Collections Manager at the Dorset History Centre, will examine contemporary documents - including the Bishop’s registers and a particularly full set of manor court rolls from Gillingham - to assess the immediate impact and progress of the plague, as well as its long term consequences.


The National Trust looks after over 50 hillforts in SW England. These range from dramatic features such as Hambledon Hill in Dorset and Whitesheet Hill in Wiltshire, to cliff castles such as The Rumps in Cornwall or Rough Tor on Bodmin Moor. The majority of these sites are designated Scheduled Monuments as well as Sites of Special Scientific Interest.

Hillforts take a great deal of work to manage, from preventing scrub and trees damaging archaeology to preventing damage from burrowing animals or human erosion. Similar work is needed to protect the archaeology as well as the wildlife. The project aims to protect and enhance the historical and natural interest of some of the key National Trust owned hillforts in Dorset and South Wiltshire and is part funded by the People’s Postcode Lottery. It will also include improving access, better signing and information as well as further research. NT Archaeologist, Dr Martin Papworth, will be joined by Wildlife Adviser, Simon Ford, to explain more about these sites and reveal how the project is progressing.

This talk will be preceded by the Annual General Meeting


Thursday 10 October: Napoleon’s coming! What shall we do? In late 1797 Napoleon declared that France ‘must destroy the English monarchy, or expect itself to be destroyed by these intriguing and enterprising islanders... Let us concentrate all our efforts on the navy and annihilate England. That done, Europe is at our feet.’

With the south-eastern coast of Britain already heavily defended, this left Dorset as a very likely location for such landings to occur.

This talk by Dr Diana Trenchard illustrates how the county led the way in making detailed plans to resist French invasion and how these were adopted by the British government to be repeated in other coastal communities across the nation. 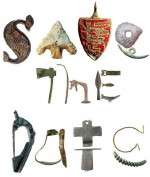 Every year thousands of archaeological objects are discovered by members of the public; many of these are unearthed by metal detector users, while others are found by people out walking, gardening or going about their daily work. The Portable Antiquities Scheme is a voluntary programme run by the British Museum and National Museum of Wales to encourage the identification and recording of such finds. Ciorstaidh Hayward-Trevarthen has been Finds Liaison Officer for Dorset since 1999 and is a frequent visitor to Sherborne Museum, where she identifies objects brought in by members of the public to our regular Finds Days. Here, Ciorstaidh will briefly outline the Treasure Act (1996) and give a glimpse into her intriguing work as a FLO under the Portable Antiquities Scheme. In a less formal session for the festive season we’ve invited members of our research teams to give an insight into the invaluable work they undertake behind the scenes at Sherborne Museum.

The volunteers will share some of the absorbing stories they’ve uncovered while researching our unique and varied collections over the course of the year and show how the museum plays an important role in conserving these artefacts for future generations.

Thursday 9 January 2020: On the Parish: Voices of the Sherborne Poor “Kill me sooner than take me there,” implores Betty Higden in Charles Dickens’ novel, Our Mutual Friend (1865); even today, the Victorian workhouse still inspires powerful images of fear and hardship in the contemporary consciousness.

But what evidence do we have that conditions in Sherborne’s union workhouse were really so dire? And what do we know of the lives of those who threw themselves on the mercy of the parish?

Using detailed accounts held at Sherborne Museum and the Dorset History Centre, local historian Luke Mouland seeks to draw out the personal stories of the town’s poor to further explore this theme. Frances was born in the Isle of Ely and currently lives in Weymouth where she is inspired by Portland and Chesil Beach. She exhibits throughout the UK and was awarded The Shenzhen International Watercolour Biennial Prize by the Royal Institute of Painters in Water Colours 2016. She is Senior Tutor at West Dean College. Dorset is not a county usually associated with the long campaign for votes for women that culminated in partial enfranchisement in 1918. However, that does not mean that the women (and men) of the county were indifferent to women’s lack of citizenship.

Professor Karen Hunt, Keele University, will explore where in Dorset women chose to organise, what they did and the effects it had locally.

Why did suffragism blossom in some places and not others; why were there far more suffragists than suffragettes; and how did the experience of this campaigning affect Dorset women once the vote was won?